REMINDER for precious metals bull runs: Gold usually responds first, which it has. Silver lags, which it did. Then it catches up, which it’s doing. Next, it surpasses gold, which it will…

But I believe that’s all about to change very soon.

Not surprisingly, silver’s trough-to-peak gains have put gold’s to shame (as they usually do). Really? Yes. Silver bottomed in March near $12/oz, then catapulted in early August to a $29/oz peak (hitting $30.29/oz intraday) for a robust 142% gain in a little over 4 months. Wow. Wow. Wow.

When silver moves (albeit in a volatile manner at times), it moves fast and furiously. And odds are much in favor of the white metal going on several more runs like this in the near and distant future.

Why is that? Here’s what’s increasing the horsepower of the metal and why what lies ahead for silver is, very likely, going to surprise us all—even yours truly.

It’s widely accepted that silver has several drivers. Like gold, It’s a hedge against crises and uncertainty. It’s also an industrial metal with over 10,000 uses, including cell phones, electronics, computers, and appliances. And two growing industries—electric cars and solar energy—are making silver demand surge, putting pressure on its already depleting supply. We also shouldn’t forget the demand for silver from the jewelry industry as well as other products and services.

If we look at how silver’s performance compares to gold when the metals rally, it turns out silver has “outshined” gold five of the last six times: 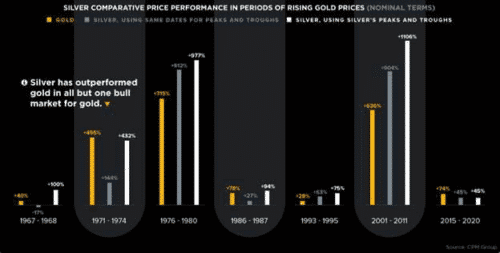 I believe silver will likely outperform gold again this time, and the main driver will be its increasing investment demand.

According to the Silver Institute’s annual World Silver Survey, investment demand was up 12% in 2019 over the previous year. The Institute recently reported that in the first half of 2020 alone investors hoarded 10% more silver than in Q1 2019, mostly through buying silver-backed exchange-traded products (ETPs). As a result, ETPs have been setting successive record levels of holdings this year. The graph below shows the total silver demand for 2019. What’s more, it’s estimated that just 6% of all above-ground silver is in investment form like coins or bars. The rest is almost evenly split between industrial uses and jewelry/decorative uses.

Silver supply is being challenged

Growing investment demand aside, one of the biggest drivers of higher silver prices is going to be its limited new supply. Less than 30% of new silver supply comes from major silver mines. Most newly mined silver is produced as a by-product of other metals, like gold, copper, lead, and zinc: Once silver prices soar, mines that produce silver cannot just ramp up silver production. And silver is often a small portion of their revenues, so there’s little incentive to produce more.

With fundamentals lining up, let’s examine the technical side of silver’s near-term outlook. Silver has been forming a symmetrical triangle pattern since early August. Volume’s been dropping over the past month, and the RSI and MACD momentum indicators continue to move downwards. This suggests more if not continued consolidation and, for now, a possible downside move once the triangle is breached. The $26 level is the first downside target, then the $22–$23 range would be next, just below the highlighted yellow “consolidation” area. But not to worry. In fact, it may be an opportunity to buy more.

I believe the current consolidation/correction may still play out over the next couple of weeks, but upon completion I’d expect silver to come back with fireworks!

The Fed is standing ready to provide more STIMULUS (money printing) on demand while the European Central Bank and others are signaling more as well. The COVID pandemic is still in our front-view mirror with cases ticking up. Let’s also not forget that October is historically the worst month for the markets without an election month following… But, in this year’s case, there is a critical federal US election in November in a highly antagonistic political environment, which will add even higher volatility to our limping economy, frothy financial markets, and tenuous global geopolitical events.

What will that mean? Silver will likely surge above $35 before the year is out as its monetary role starts to dominate once again.

Darwin has over 30 years of experience in the investment and risk financing sectors, focused on precious metals as investment assets. As an avid writer, Darwin has published multiple articles about investing in gold and silver, with a focus on their ability to protect and grow his clients’ investment portfolios. As a leading Sr. Portfolio Manager with Gold Alliance, Darwin oversees many of our clients’ portfolios.
← What Do Financial Investors Think About Gold? 5 Reasons to Consider Gold as an Investment When You’re 55+ →