How Does Your Stock Market Portfolio Perform Under Inflation? As we noted in a recent article, Do You Believe the Fed’s Inflation Rhetoric?, the Federal Reserve is dismissing any concerns about inflation. Instead, they are focusing on achieving “full employment” while allowing inflation to rise and the economy to run hot. Allowing inflation—in their mind—may be a necessary evil to reach what they consider full employment.

But this is making the bond market very unhappy. The chart below shows the 7-year yield.

Compared to the lows of the summer of 2020, yields are up, but they are still significantly below pre-pandemic levels. The rising yields could suggest the economy is recovering, but the Fed is actively fighting rising yields as it wants them to remain low to keep the economy “running hot” with cheap money.

Are the stock market and the bond market correlated?

This “battle” between our government and the markets is important. In the three decades from 1966 to 1997, the markets were primarily driven by inflation, and, generally, the stock market and the bond market moved in opposite directions (when one goes up, the other goes down and vice versa). That pattern changed around 1997 as inflation stopped being a significant factor, and the two markets have mostly moved in the same direction at the same time since then.

Should the markets return to being inversely correlated—where bonds and stocks move in opposite directions—as inflation takes hold, the stock market will drop when interest rates go up.

How does the stock market perform under inflation? It’s also important to remember that during these inflationary times, the loss in purchasing power on stock market portfolios due to the erosion of the dollar was devastating to their holders—just imagine that the value of your investment stayed the same but incurred a 10% yearly inflation tax on its real value for a few years…

Will the markets lose their trust in the Fed?

One of the reasons markets have been going up and up is that they believe the Fed’s narrative. They trust that the central bank will keep printing money and support the markets. But here lies the danger: Once the markets stop believing that the Fed can keep interest rates under control, things are going to get ugly for stocks.

And Jerome Powell and the other Fed officials cannot allow that to happen. The central bank is purchasing $120 billion in bonds per month, but if rates keep rising, the Fed will have to take action. They will try to control the yield either directly or indirectly, but they have a problem: At some point, the continuous stimulus and money printing will welcome back full-blown inflation.

And if you think this is interesting, I can add that if interest rates keep rising and result in a stock bear market (like we saw in 2000), the economy could enter a recession. This would increase unemployment—the opposite of what the Fed wants. As we noted several months ago, the Fed has really no way to win this over time. Unlimited money printing is not sustainable, and as time goes by, the exact way in which this will fail will be unveiled to us.

How does gold perform under inflation?

With the prospect of inflation and a possible stock market decline, what can you do to protect your investments? Well, if we go back to the 1970s—the last time we saw soaring inflation—we see that the price of gold skyrocketed: 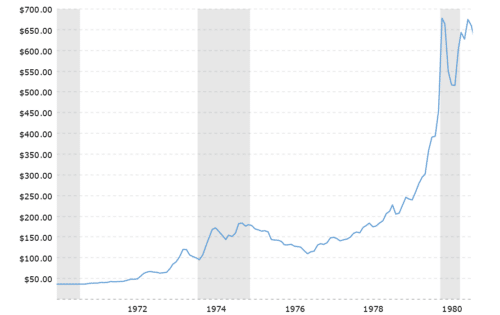 One of the biggest mistakes people make in their investment choices is that they think they can time the market. The truth is that it’s impossible to do so. We all make that mistake. I personally make my investments these days with the assumption that inflation is coming soon. And I have no doubts about gold being one of the best hedges against that inflation. That’s what gold does. During inflationary times, gold investing does better than just protecting your investments: it will also grow them. And if you believe inflation is coming, you should buy gold and then wait instead of waiting to buy gold in the hopes you will be able to catch the price movement when it happens.

← How Do I Sell My Precious Metals? What Really Moves Gold Prices Up and Down? →