How You Can Profit From Gold Price Manipulation

Just yesterday, we saw the Dow Industrial Average close again above 30,000, its highest point in history. And that is happening while our real economy is in freefall:

And let’s not forget, long food lines are now a common sight in many cities across the country. It would appear the dominoes are lining up for the fall. Yet, the beat goes on in the markets.

There is a simple explanation: when fundamentals don’t make sense, when logic doesn’t apply, you’re probably in dangerous waters. We were in a similar place at the end of 2019 to where we are now. Just look at the most recent Fear/Greed Index below: As expected, the US dollar continues to fall. And the 10-year Treasury yield has been flashing red for the last month. Yet, gold and silver, usually with an opposite correlation, have also been falling of late. If you are aware of the core fundamentals, you should raise a brow—how can the dollar and gold go down together?

How does Wall Street manipulate the precious metals market?

How do you explain this? It’s called market manipulation. Wall Street regularly does this for their own interests, especially in the precious metals markets—JP Morgan, for instance, was recently fined $1 billion for doing exactly that.

How? Banks initially drive the price of metals lower by selling futures to force those who are long (buyers of futures) to cover their losses. Once the price gets downside momentum, they begin to cover their shorts by buying from those selling (at a lower price, of course).

Manipulating the markets lower to create FEAR amongst the retail traders (also known as “dumb money”) allows “smart money” to pick up long positions on the cheap prior to the next sustained move higher.

When does Wall Street manipulate the markets?

To strengthen my point: many of the biggest drops in gold and silver over the past three decades tend to occur during illiquid periods. Why? Because the less liquid markets are, the less money and effort it takes to drive them lower. Therefore, manipulating prices lower by selling futures for maximum effect typically occurs around major holidays when most commercial traders are not at their desks: July 3 or 5, Thanksgiving week, and around the Christmas holidays. And, curiously, these drops tend to occur on Fridays and Mondays.

As an example, here’s how gold futures looked on Friday, November 27, the day after Thanksgiving. The big banks are waiting for these dates when they, with a single trader armed with a lot of money, can affect a large market. This is what price manipulation looks like: 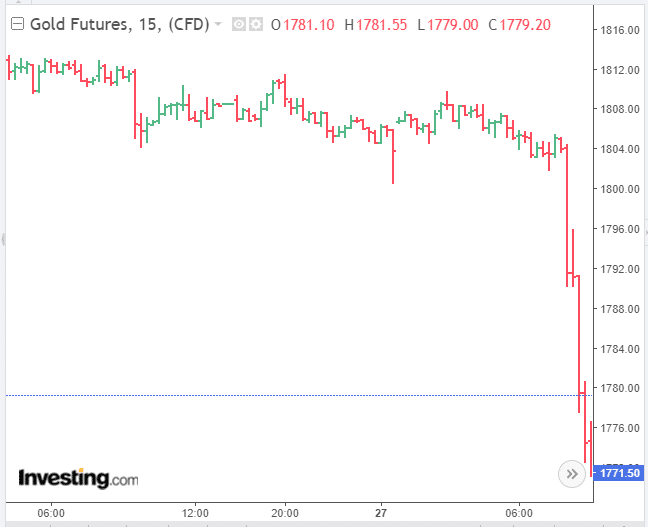 The timing of such manipulation? It often occurs after the expiration of futures/options. The December futures contract expired that week.

Market manipulation has an expiration date, as demonstrated in the 1970s and 2000s in particular. Ultimately, supply and demand win. Wall Street cannot suppress metals prices from going up; they don’t want to either. They just want to make money at the expense of everyone else, but here is where you have an edge if you know this trick. Simply be invested when gold and silver make their next move higher.

The Smart Money (China, Russia, JP Morgan) have loaded up on the physical metals the past two years. And central banks around the world have been buying and repatriating their gold and silver from the US in preparation for events to come.

A great time to purchase gold as an investment

I consider such artificial depression of current gold and silver prices a gift given the much higher prices to follow. To enjoy this gift, you have to join the move of the manipulators: as the price goes down, they start picking it up at lower prices. I believe this is a great entry point into gold investing, especially when you can sell your stocks at a historic high.

Darwin has over 30 years of experience in the investment and risk financing sectors, focused on precious metals as investment assets. As an avid writer, Darwin has published multiple articles about investing in gold and silver, with a focus on their ability to protect and grow his clients’ investment portfolios. As a leading Sr. Portfolio Manager with Gold Alliance, Darwin oversees many of our clients’ portfolios.
← Hearts of Gold—7 Heartwarming Stories When We Need Them the Most Gold as an Investment: The Official Guide for 2021 →