Is China Planning to Attack the Dollar With a Gold-Backed Yuan?

by Brandon DuplessieApr 22, 2021Market Insights, The US Dollar 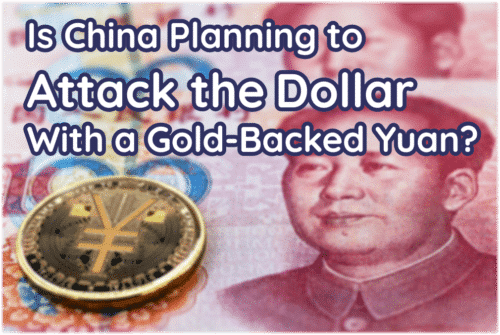 In 2018, China launched a oil futures contract that was priced in yuan but could be converted to gold. It means that oil producers could sell oil to China and immediately convert the yuan they got into gold, providing them better value than the paper yuan and even the dollar.

The move raised concerns that this so-called “petroyuan” would be the first of a series of blows China is planning to impact the world’s reserve currency, our dollar.

And those concerns seem to be valid. In the fourth quarter of 2020, central banks worldwide are holding less dollars as the dollar’s share of global exchange reserves dropped to 59%, according to the IMF — its lowest number since 1995. 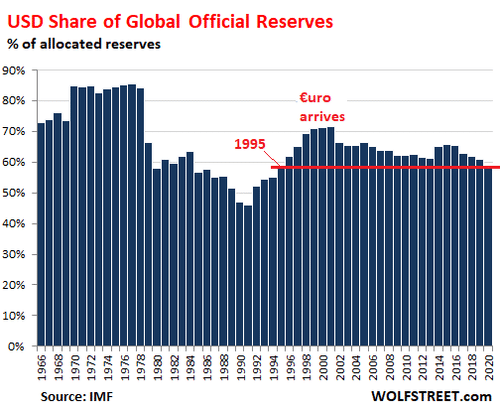 Now, China is launching an “uppercut” aimed at dethroning the dollar. Beijing has been experimenting with its own digital currency, including large-scale trials where consumers could use this currency for payments.

They’ve taken the lead in the ring, and just recently they became the first major economy to unveil a central bank digital currency. But China knows it will take a series of blows to take down a reigning champion, so they have not stopped there.

A dramatic return to the global bullion market

This week came the news that the People’s Bank of China (China’s central bank) is now allowing domestic and international banks to import significant amounts of gold into the country. Until then, the central bank had tight restrictions in place, usually only allowing enough gold to enter the country to satisfy local demand.

According to sources, 150 tons of gold (worth $8.5 billion at current prices) will be shipped in April and May. That’s an eye-opening return to the gold market since Beijing only allowed around 10 tons of the precious metal into the country per month throughout 2020 and early 2021. And it’s twice the amount of gold China imported per month in 2019.

What puts this into perspective is that China is already sitting on a huge pile of gold. China is the world’s largest mining producer of gold. They don’t need to import gold unless they have a plan for it.

The loosening restrictions on gold imports could be a sign that China may be moving towards a gold-backed yuan to escape a coming dollar collapse and to reinforce their own currency. Think about the security that a gold-backed currency would give to central bankers around the world. If I am a central banker, then not only can I hold the yuan as a reserve currency for trading purposes, but knowing it’s backed by gold gives me the peace of mind it will not be devalued… well, at least not at first.

In theory, China could implode the value of the dollar if it monetizes its gold reserves via its own gold-backed currency. While this could look like a quick knockout victory for China — which some writers claim could come really soon — the situation is more complex than that: it’s not in China’s immediate interest to destroy the dollar since China would pay a heavy price for it.

China owns roughly $3.4 trillion, including $1.5 trillion in US Treasuries, corporate debt, and short-term debt in the US. Beijing is actively using these funds in loan finance to its commodity suppliers, including its Belt and Road Initiative (China’s global infrastructure development strategy to secure its economic future by connecting Eurasia, Africa, and Oceania to generate trade).

If China, in the near term, goes after its aspirations to make the yuan the world’s reserve currency by destroying the dollar, China would lose its significant influence around the world because only a fraction of its loan financing is held in yuan. In this scenario, the US would gain a geopolitical advantage over China from a dollar crash, and that’s the last thing China wants.

In fact, if the dollar starts sliding in foreign exchanges, China might even call on the Fed to strengthen the dollar because a weak dollar makes US imports from China more expensive, which would harm China’s economy. The Fed is unlikely to budge, however, since it’s addicted to its inflationary policies of money printing and low interest rates.

If the Fed’s money-printing machine creates a currency-devaluation crisis with severe consequences for the dollar and other fiat currencies, then China may have the incentive to crush the dollar as a way to protect the yuan. Since international banking is heavily skewed towards the dollar, during a full-blown currency crisis our greenback will be unable to maintain its status as the world’s reserve currency once the dollar accelerates downwards, and China will be concerned that the dollar will drag down the yuan.

As these events unfold, the credit cycle will collapse, and it’s at this point that China will have no choice but to leave the dollar in the dust and, at a great cost to itself, move towards the goal of making the yuan the world’s reserve currency. This is not something China would attempt out of the blue tomorrow.

Instead, Beijing will move slower and more strategically by securing its own currency and preparing itself for this option. It’s also in their interest that their move will be seen as necessary to protect the yuan and not as a deliberate attempt to undermine the dollar.

There will be a monetary vacuum to fill, and the reward of implementing a gold-backed yuan will be the skyrocketing value of China’s gold reserves and China’s ability to appear on the world stage as the savior. So perhaps, with the introduction of the digital yuan, which gives China more control over its currency, China is showing their preparation to continue on a path that will lead them to yuan dominance, ready to strike the final blow when and if the time calls for it.

Will this be the end of an era for the dollar?

Once China adopts a new gold standard, other countries are likely to follow, especially its close Asian neighbors. Nations across the world will then have to make a difficult choice: Should they hang on to their weakening currencies and their increasing problems financing their welfare states, or should they stabilize their currencies and follow in China’s footsteps?

Either way, and regardless of cause and effect, if we see a gold-backed yuan, then the dollar will lose its dominance — which, by the way, would not be the first time in history a currency has to step aside and make room for its successor. Many empires held reserve currency status, and history shows it does not last forever: 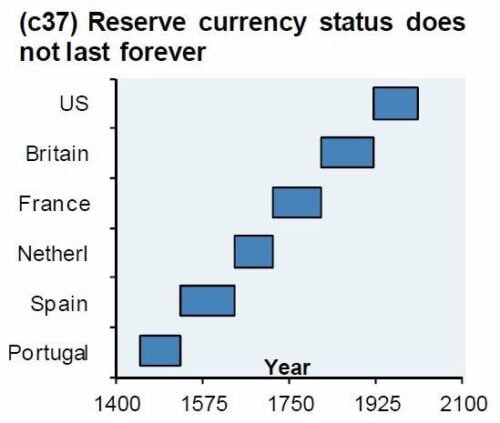 The dollar is already under threat — from our own central bank

Let’s return for a minute to the Fed’s inflationary policies mentioned above as they can lead us to the scenario of the dollar being dethroned.

In the past year, the Fed has printed around $4 trillion dollars. That’s roughly one-fifth of all the dollars ever created. Combine that with near-zero interest rates and we have a recipe for inflation and currency destruction. Short and simple: Our own central bank is eroding the value of our own currency. And by doing so, it’s also eroding the confidence in the dollar and empowering our biggest strategic foe.

The lesson here is to not be afraid but to prepare. We as a nation should not worry whether or not China is setting up the yuan to take over the dollar’s throne, but we certainly don’t need to set the stage for them, which is sadly what is currently happening.

You as an individual cannot dictate our administration’s or the Fed’s policies, but it’s your duty to yourself and your family to prepare your investments to survive the potential erosion of the dollar. If you do so with diversification into gold, your investments will grow even in the most adverse conditions for the dollar as the price of gold will skyrocket. If you don’t, you’ll join the many people who will have to face the consequences of not being protected during a major currency crisis.

← A Guide to Diversifying Your Portfolio Are You Ready for the Debt and Asset Bubbles to Pop? →