What Does the New Administration’s Challenges Mean for Gold and Silver Investments?

by Darwin HostelleyJan 21, 2021Market Insights, Market News, The US Dollar

What financial challenges is the new administration facing?

There’s a new sheriff in town. This new administration has taken the reins with major problems on its hands…

1) The already weak US dollar is in freefall. The greenback has declined almost 15% since early last year, according to the US Dollar Index: 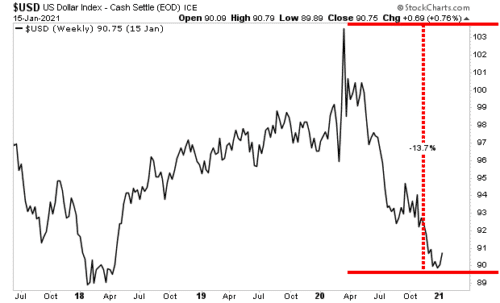 The ONLY time in history the US dollar fell to these levels was when a major black swan event was occurring in the global financial system. Think about that for a minute…

2) The US government debt heap is over $27 trillion and counting. That equates to a debt-to-GDP ratio of 130%. This is exactly where Greece was when it imploded in 2010.

How will our government try to fix the weak dollar and our economy?

Our new administration has a solution to try to strengthen our dollar and help the economy: issue even MORE debt via what will be one of the largest—if not the largest—fiscal stimulus undertakings in history.

Next: An infrastructure program worth $2+ trillion.

Following: Our new Treasury Secretary, Janet Yellen, has stated that she believes climate change is an “existential threat” that she will use policy to fight it. Throw in various reparations plus other “social” spending programs (that’s plural) and you’ve got the makings of HOT inflation aka hyperinflation.

This means even MORE money printing and credit issuance.

And this is at a time when the US is already running a $3 trillion deficit.

What will record government spending and money printing mean for gold and silver?

All of this is going to unleash an inflationary tsunami.

Unfortunately for this new administration, the COVID-19 pandemic has revealed that policymakers will deal with any and all issues going forward by, you guessed it, printing money.

The fact that our central bank, the Federal Reserve, is doing this at a time when it is perched atop the largest debt pile in history will only accelerate what we’ve been expecting.

With insurmountable debt, there is absolutely no way the US can pay it off… or down, for that matter. HyperInflation is the only answer to reflating away the untenable debt load.

Gold and silver investors are prepared. Are you?

Darwin has over 30 years of experience in the investment and risk financing sectors, focused on precious metals as investment assets. As an avid writer, Darwin has published multiple articles about investing in gold and silver, with a focus on their ability to protect and grow his clients’ investment portfolios. As a leading Sr. Portfolio Manager with Gold Alliance, Darwin oversees many of our clients’ portfolios.
← Why Central Banks Are Now Promoting Gold Investing and How Your Portfolio Can Profit From It Is This the Beginning of Another Stunning Bull Run for the Price of Gold? →